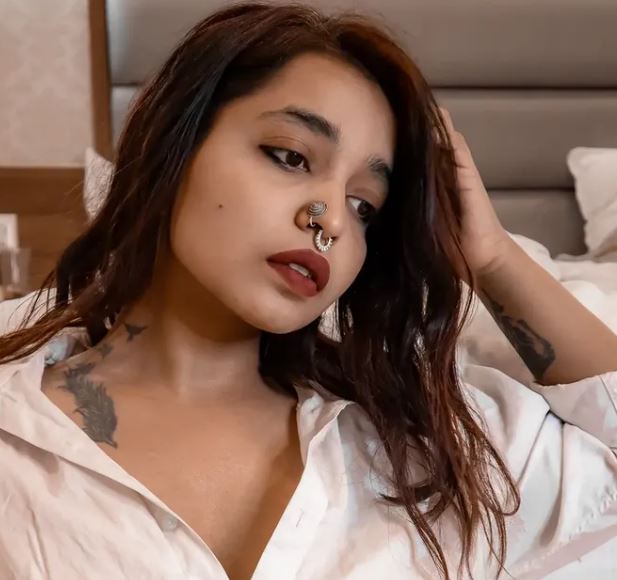 Kshama Bindu is a content creator and a private firm employee who went viral in June 2022 for adopting sologamy and marrying herself.

Kshama Bindu was born as Soumya Sarita Dubey on Sunday, 12 August 1998 (age 24 years; as of 2022). She is from Daman a city in Gujarat, India.
Kshama Bindu in her college days
She completed her Bachelor’s in Sociology (Gender Studies) from The Maharaja Sayajirao University of Baroda.

She is the daughter of Sarita Dubey and has a sister named Swati Dubey. Her father stays in South Africa; he and her mother both are engineers.
Kshama Bindu with her mother and sister

In 2022, Kshama decided to adopt sologamy also known as autogamy. Sologamy is a concept in which a person marries themselves. It is a trend that people have been adopting in western countries for a while. In India, Kshama is the first person to adopt sologamy and marry herself. Her wedding is on 11 June 2022 which she will do by performing all the Hindu rituals at a temple in Gotri in Vadodara, Gujarat. Just like every bride, she has bought a lehenga of her choice and distributed her wedding invitation cards which only have her name.
Kshama Bindu’s wedding invitation
After marriage, she has plans to go to Goa for her honeymoon. After news of her solo marriage came out reporters went for her interview and asked her about how she ended up with this idea. She said,
This idea was there in my mind since childhood but I was not sure if it was possible. Once I Googled, can I marry myself and that is when I got to know about the concept of Sologamy. After this, I thought why not marry myself.’
She was also asked why did she choose sologamy instead of marrying a man and she replied to this question by saying,
Self-marriage is a commitment to be there for yourself and love yourself unconditionally. It’s also an act of self-acceptance. People marry someone they love. I love myself and hence this wedding.’

She had a friend named Raj Bhatt who was very close to her and also appeared in some of her Tiktok videos. Once she posted a specially written poem for him, she tried to convey what he means to her and how close he was to her. However, she never proclaimed that he was her boyfriend.

She began her career as an HR Manager at Ashwamedh Political Consulting. After this, she also worked as a freelance model and a dance choreographer.  Her next stint was as a senior recruiter at IMS People Possible. Meanwhile also started off as a content creator on TikTok and had a huge following until 2020 when Tiktok was banned in India. Her most popular video on Tiktok had 43 thousand views.