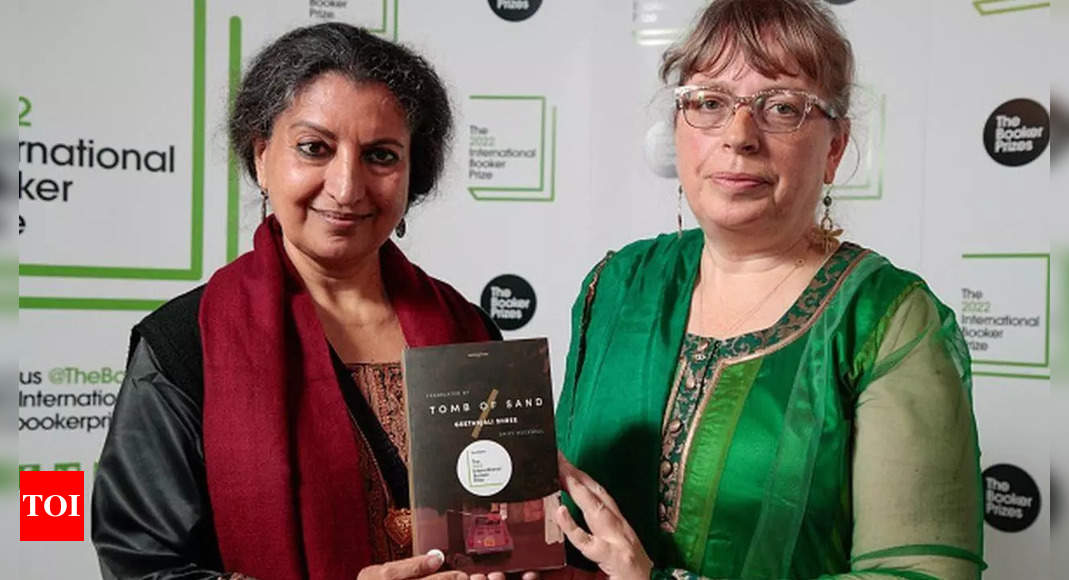 An American translator who lives in Vermont, a Hindi novelist who lives in Delhi, a Bengali translator who played matchmaker and introduced them to each other, and a publisher based in the UK. It’s this unique collaboration that made literary history on Friday with Geetanjali Shree’s Hindi novel “Tomb of Sand”, translated into English by Daisy Rockwell, becoming the first book in any Indian language to win the International Booker Prize. Shree is also the first writer from India to win the prize, which is awarded every year for a book that is translated into English. It’s distinct from the Booker Prize, which has been won by Indian writers like Arundhati Roy and Aravind Adiga in the past.

Shree, who had earlier told TOI that when the novel was first published in India, some people told her that it was impossible to translate because it didn’t have a simple linear plot and there was so much play with language, gave a stirring acceptance speech.
Tomb of Sand a ‘strange inter-continental effort
I never dreamt of the Booker, I never thought I could. What a huge recognition. I am amazed, delighted, honoured and humbled,” Geetanjali Shree said after the award ceremony in London.
Shree said it felt good to be the first novel in Hindi to win the prestigious prize. “Ever since the book got longlisted, much has been written about Hindi making it for the first time. It feels good to be the means of that happening but also obliges me to emphasise that behind me and this book lies a rich and flourishing tradition in Hindi and South Asian languages.”
Geetanjali Shree wins International Booker Prize for ‘Tomb of Sand’
Set in north India, the novel, originally called “Ret Samadhi”, follows an 80-year-old woman who slips into depression after her husband’s death but gains a new lease of life after striking up a friendship with a hijra and travelling to Pakistan to confront the unresolved trauma of her teenage experiences of Partition.
Shree and Rockwell will split the £50,000 prize money, giving the author and translator equal recognition. “Tomb of Sand” was chosen from a shortlist of six books, with a record number of 135 books being submitted. It has also won the English PEN translation award.
Rockwell, who is also a painter and lives in Vermont, US, spoke about how the book came to be. “Deborah (Smith, a publisher in the UK) had read a translation of something else by Geetanjali and heard about this book and wanted to find a translator for it,” she said. “Like many successful Indian couples, we had a matchmaker, the prolific Bengali translator Arunava Sinha.”

Sinha said: “It …really demonstrates that a great book that uses its own original language with superb imagination and magical skills can find an equally fantastic translation …The way Rockwell has worked with language, puns, rhythms and sounds is extraordinary.”
Shree and Rockwell were unable to meet in person while the novel was being translated due to the pandemic and communicated through email. “It’s not an easy book to translate because of Geetanjali’s unique style and wordplay,” Rockwell told TOI in a previous interview.
Rockwell, who holds a PhD in South Asian Literature from the University of Chicago, has been reading Hindi and Urdu literature since the early 1990s. Her literary agent Kanishka Gupta called the book “a strange inter-continental collaboration” as Shree writes in Hindi, the primary publisher Tilted Axis is based in the UK, while Rockwell lives in the US.
He hoped the win would make international publishers more receptive to South Asian languages. Sinha also expected the win to create more curiosity about Indian translations in the West. “It really shows that books that were once dismissed as regional literature aren’t regional literature at all,” he said. “They are in fact top-class literature to be written in a language that comes from a particular area — does anyone call French or German literature regional?”