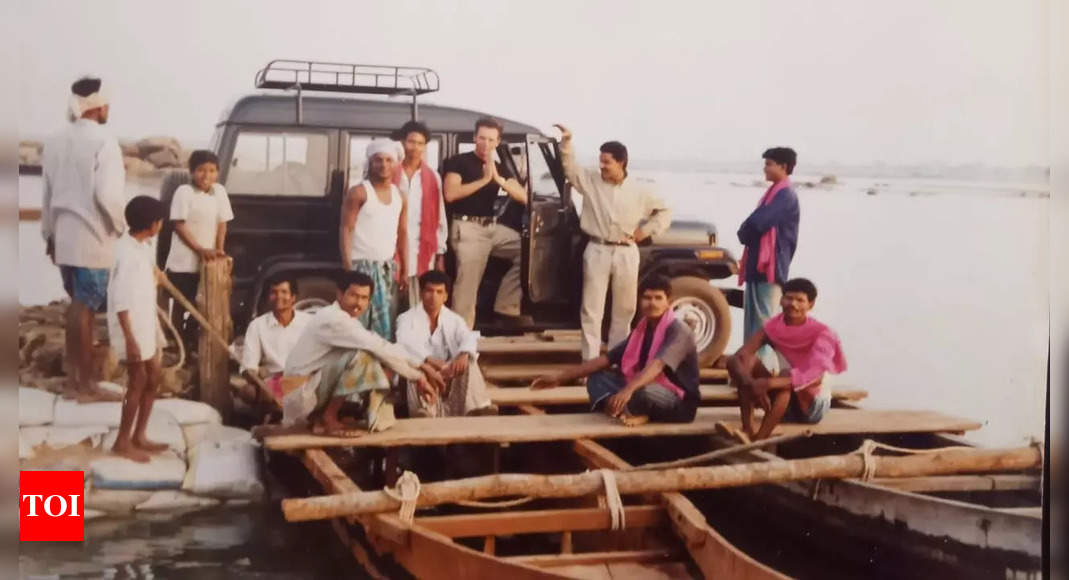 RANCHI: As many as 12 days after internationally acclaimed US photographer Marcus Leatherdale died by suicide at his bungalow in Mcluskieganj on April 22, his last rites were performed as per Hindu rituals in Ranchi, 60 km away, on Tuesday.
The 69-year-old known for his work in black and white using the famous Hasselblad camera and his photographs of Madonna, was severely depressed after suffering a few losses at the personal front recently. Leatherdale, who made India his second home in the 1970s, is survived by his adopted Hindu son Kailash Yadav who performed the last rites at Harmu Muktidham. His body had got decomposed in the absence of a fridge in the morgue where it was kept due to an inordinate delay in handing it over for the last rites.
The American photographer, who initially settled in Varanasi to photograph sadhus, was also known for his pictures of the elites of Mumbai. His close aide in Jharkhand, Justin Imam, told TOI his story of visiting the state in the 1990s to shoot the tribals and finally settling down — initially in Hazaribag and later in Mcluskieganj — after buying a sprawling bungalow there.
“Marcus came to Hazaribag in 1997 to meet my father Bulu Imam and seek his guidance for photographing the tribes of central India. It was then that I accompanied him to Bastar in present-day Chhatisgarh on a green Mahindra Marshall — that he called ‘hara hathi’. This special edition four-wheeled off-roading SUV of Mahindra was gifted to him by none other than Anand Mahindra, the owner of Mahindra and Mahindra and a friend of Marcus,” Justin said.
About his adopted son, Justin said while in Varanasi, Leatherdale was served by a tea seller named Kailash. “He was so fond of the little boy and his service that he decided to adopt him and it is he who takes care of all his belongings, including the antiques and Turkish carpets that he was fond of,” Justin said.

With properties in various countries, Leatherdale lived a life king-size and had special affinity for India. Bulu Imam, who has been awarded with the Padmashree, remembers that while in Varanasi in the late 1970s, he took photos of the sadhus smoking marijuana and his collection was highly appreciated.
“He photographed the elite, the prince of the Indian royal families and almost every haveli around UP, Rajasthan, Gujarat and Maharashtra. But he was a portrait photographer and used two most expensive box cameras — the Hasselblad, that shone to fame for shooting on the moon,” Bulu said. Leatherdale spent three years with Bulu and his family in Hazaribag saying initially at his residence and later at a rented house in Canary hills. “His collection of tribes of India was published in Aadivasi: Potraits of Tribal India and he held at least one exhibition in different countries of the world since 1980s,” Bulu said.
Leatherdale held more than 60 photographic exhibitions in more than a dozen countries, including New York, London, Australia, Spain, India and Sri Lanka. Bulu remembers his special way of using Kodak 120 rolls for shooting photographs. “He would use two rolls of 12 snaps each and keep 12 while destroying the other 12 shoots. He would then sell those photographs — framed in 25×35 inches for a hefty price. And this was his way of living — a life king-size and owning property in different countries,” Bulu said.
Leatherdale’s personal life, however, was strained as he got separated from his wife. While in Portugal, he had a friend, Jorge Serio, whose death followed by that of his pet dog, Sasha, had shattered him. “Marcus recently lost his mother and was depressed,” Kailash told TOI.
Days ahead of committing suicide, Marcus was mentally disturbed and his Facebook wall stands testimony to his mental condition. A day before committing suicide, Marcus had posted, “Everybody has gone through somethings that has changed them in a way that they could never go back to the person they once were. He also posted the same day a two liner by Albert Camus: ‘What is called a reason for living is also an excellent reason for dying’.”