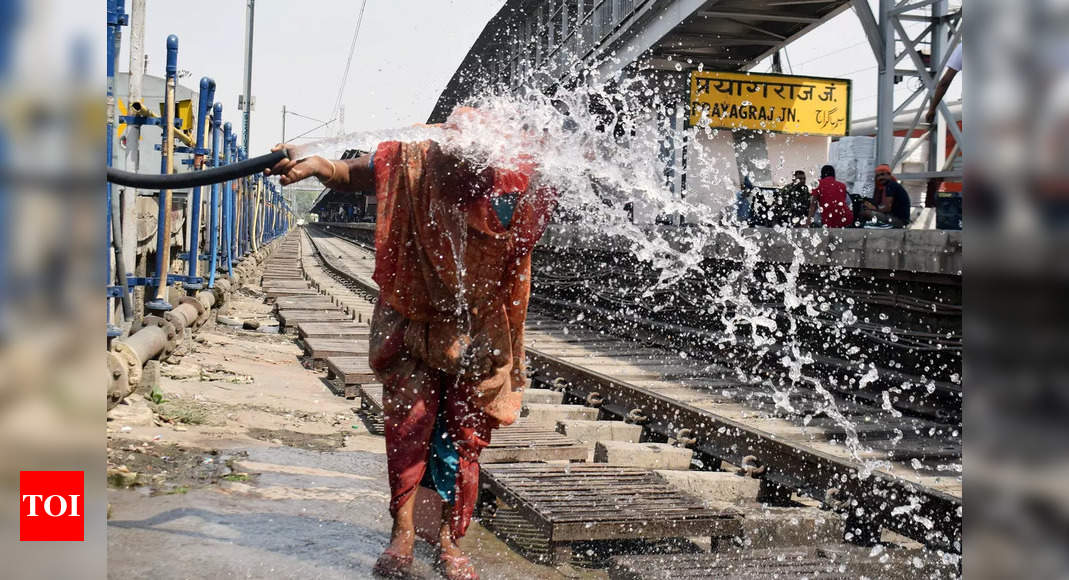 NEW DELHI: Amid a punishing heatwave building up in large parts of India, the India Meteorological Department (IMD) has issued an orange alert for Delhi-NCR and the plains of northwest India over continued heatwave conditions until May 1.
The states of Rajasthan, Delhi, Haryana, UP and Odisha have been issued a heat wave warning by IMD, as parts of these states record temperatures above 45 degrees Celsius.
Besides, heatwave conditions in isolated pockets are very likely over Punjab, Haryana-Chandigarh, Delhi, Uttar Pradesh, Rajasthan, Madhya Pradesh, Vidarbha, Chhattisgarh, Bihar, Jharkhand, interior Gangetic West Bengal, interior Odisha and northern parts of Gujarat State, the IMD said.
Heat wave conditions over Northwest & Central India during next 5 days and over East India during next 3 days and… https://t.co/Kw4Fa7pxKV— India Meteorological Department (@Indiametdept) 1651132318000
Meanwhile, Rajasthan, Gujarat and Andhra Pradesh have imposed power cuts on factories as consumption for air conditioning and fans skyrocketed. On the other hand, water shortages will hit farmers hardest, including those growing wheat as India aims to boost exports to help ease a global shortage due to the war in Ukraine.
Here’s all you need to know about the current situation in India-
Delhi breached the 40-degree temperature mark
The national capital recorded the highest temperature of 44.2 degrees Celsius at Siri Fort Complex on Wednesday. A ‘yellow alert’ has also been sounded for Delhi.
Skymet Weather said that the heatwaves will not only restrict to Delhi but will also affect the residents of North India.
These #heatwave conditions will last until the end of this month with sultry conditions affecting the residents of… https://t.co/30YdjNhQRu— SkymetWeather (@SkymetWeather) 1651081582000
Western Disturbance may bring some relief
A Western Disturbance on May 2 will bring in some relief for northwest and central India, senior IMD scientist RK Jenamani said.
In an advisory, the IMD said that under the influence of another fresh Western Disturbance likely to affect northwest India from May 2, light/moderate isolated/scattered rainfall accompanied with thunderstorm/lightning is likely over the Western Himalayan Region during May 2-4.
1/8

In pics: Severe heatwave alert across India, days of relief may come next month

Show Captions<p>As Delhi breached the 40-degree temperature mark this week, a private forecaster, Skymet Weather on Wednesday issued a warning with the prediction that heatwaves will last until the end of this month and may witness a downfall at the beginning of May. (BCCL)</p><p>The national capital recorded the highest temperature of 44.2 degrees Celsius at Siri Fort Complex on Wednesday. A ‘yellow alert’ has also been sounded for Delhi. (AP)</p><p>The India Meteorological Department (IMD) has issued an orange alert for Delhi-NCR and the plains of northwest India over continued heatwave conditions until May 1. (BCCL)</p><p>Skymet Weather said that the heatwaves will not only restrict to Delhi but will also affect the residents of North India.</p><p>Heat wave conditions will prevail in isolated pockets over west Rajasthan during April 28-30 with severe heatwave conditions on May 1-2; heat wave conditions in some/isolated parts over Vidarbha, west Uttar Pradesh, Madhya Pradesh, Punjab, Haryana-Chandigarh, Delhi & east Rajasthan during next five days; east Uttar Pradesh May 1, Bihar, Jharkhand, interior Odisha, Chhattisgarh & Gangetic West Bengal April 30 and Telangana till May 1. (ANI)</p><p>As per the IMD, heatwave conditions in isolated pockets are very likely over Punjab, Haryana-Chandigarh, Delhi, Uttar Pradesh, Rajasthan, Madhya Pradesh, Vidarbha, Chhattisgarh, Bihar, Jharkhand, interior Gangetic West Bengal, interior Odisha and northern parts of Gujarat State. (ANI)</p><p>For now, heatwave conditions will prevail over large parts of India. The IMD has predicted heatwave conditions over northwest and central India during next four days and over east India during next two days and it will abate thereafter. (ANI)</p><p>Notably, Northwest India this year recorded the hottest March in 122 years, with an average maximum temperature surpassing the previous record of 30.67 degrees Celsius in 2004. (ANI)</p>
“Because of this, isolated light rainfall is likely over plains of northwest India during May 3 and 4.”
Heatwave, coal shortage fuel blackouts across states
A potent combination of sweltering summer and acute coal shortages have triggered blackouts across many parts of the country as states struggle to manage record demand for electricity and low feedstock at power plants.
Relentless and punishing heatwave in Pakistan & India is entering the next level.Sadly, this is just the beginnin… https://t.co/OB2vI49VC0— Scott Duncan (@ScottDuncanWX) 1650998412000
From Jammu and Kashmir to Andhra Pradesh, consumers are facing power cuts ranging from 2 hours to 8 hours. Factories are the worst hit as the industrial sector is the first port of call for regulating electricity supplies.
Mercury crosses 45 degree Celsius in 7 Rajasthan districts
As Rajasthan reeled under severe heatwave, the temperature soared above 45 degree-mark in seven districts of the state in the past 24 hours.
While Banswara recorded the highest temperature of 45.5 degrees on Wednesday, Vanasthali clocked 45.4 degrees, Dholpur — 45.4, Barmer — 45.1, Jodhpur’s Phalodi — 45.2, Bikaner — 45.2 and Karauli was at 45 degrees Celsius.
The maximum temperature in eight districts was above 44 degrees with Pilani registering 44.4 degrees, Churu — 44, Sriganganagar — 44.7, Nagaur — 44.5, Bundi — 44.5, Baran’s Anta — 44.2, Dungarpur — 44.4 and Jalore — 44.4 degrees.
Brahmpuri records highest maximum temperature in Maharashtra
Brahmpuri in Chandrapur district on Wednesday recorded a maximum temperature of 45.1 degrees Celsius which was the highest in Maharashtra during the day, said an official of the India Meteorological Department (IMD) here.
Several other cities in eastern Maharashtra too recorded temperatures above 40 degrees. Suhas Nandanwar, meteorologist at IMD Nagpur, said the heatwave conditions are expected to continue for the next five days in Nagpur, Wardha, Chandrapur, Brahmpuri and Akola districts.
Respite from heatwave in Bengal likely from May 1: Met office
Districts in southern and western parts of West Bengal would continue to reel under heatwave conditions over the next three days, the weather office said, adding that some respite could be in store from May 1 owing to moisture incursion from the Bay of Bengal.
People of Kolkata had been experiencing uncomfortable weather over the past few days owing to sweltering heat and high humidity.
As temperatures rise, PM Modi asks states for fire audits of hospitals
Prime Minister Narendra Modi on Wednesday asked states to undertake safety audits, especially of hospitals, citing rising cases of fire incidents amid searing heat in many parts of the country.
In a meeting with chief ministers over the Covid-19 situation, the prime minister said there has been a rise in fire incidents in forests and important buildings, including hospitals, as he observed that the mercury levels are rising above normal.
(With inputs from agencies)