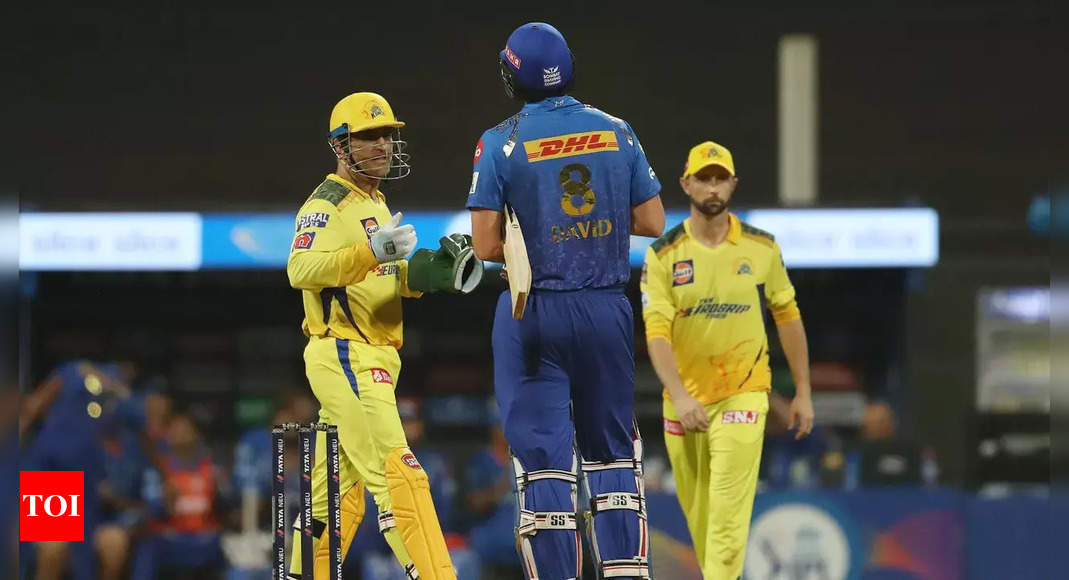 MUMBAI: Mumbai Indians on Thursday snuffed out defending champions Chennai Super Kings’ faint hopes of making the Indian Premier League play-offs with a five-wicket win in a low-scoring match here.
Opting to bowl, MI shot CSK out for 97 with pacer Daniel Sams (3/16 from 4 overs) running through the MS Dhoni-led side’s top-order with three quick wickets in a fiery opening spell, and then huffed and puffed to overhaul the small target of 98 with 31 balls to spare.
As it happened | Scorecard | Points Table
MI were four wickets down for 33 runs in the fifth over before Tilak Varma (34 not out off 32 balls) and Hrithik Shooken (18) calmed the frayed nerves with a 48-run stand for the fifth wicket. MI reached 103 for 5 in 14.5 overs.
Tim David remained not out on 16 off just seven balls.
With their eighth loss in 12 matches, CSK are out of reckoning for a play-offs berth. They remained at ninth position with eight points.
#MumbaiIndians register their third win of the season! The Rohit Sharma -led unit beat #CSK by 5 wickets to bag t… https://t.co/nqmq5Ge3n0— IndianPremierLeague (@IPL) 1652376249000
Already out of reckoning for a play-offs berth a long time ago, MI remained rooted at the 10th and bottom place with three wins from 12 matches.
Both CSK and MI have two inconsequential matches left to be played. It will be the first time in IPL history that neither MI nor CSK would be part of the play-offs.
Defending 97, Mukesh Choudhary (3/23) struck in the fifth ball of the opening over as Ishan Kishan (6) poked well away from his body to see a thin edge go through to Dhoni behind the stumps.
MI captain Rohit Sharma found a four each off Choudhary and Simarjeet Singh in the next two overs. But Simarjeet had the last laugh in the fourth over, having Rohit caught by Dhoni.
Daniel Sams set the ball rolling for @mipaltan & bagged the Player of the Match award for his fine bowling display.… https://t.co/GmHNRlrxEw— IndianPremierLeague (@IPL) 1652377390000
Choudhary then raised hopes of a CSK miracle by having Daniel Sams (1) and Tristan Stubbs (0) in the space of three balls in the fifth over.
MI were 36 for 4 after powerplay and Hrithik Shokeen survived after a review.
Moeen Ali broke the fifth-wicket partnership between Varma and Shokeen by having the latter in the 13th over but it was too late as MI needed just 17 runs from 7.2 overs.
Earlier, Sams tore apart the CSK top-order from which the Dhoni-led team never recovered.
Riley Meredith and Kumar Kartikeya chipped in with two wickets apiece while Jasprit Bumrah and Ramandeep Singh got one each as CSK innings folded in 16 overs.

CSK’s woes were compounded with the non-availability of Decision Review System (DRS) due to power cut at one of the floodlight towers at Wankhede Stadium after the start of their innings during which they lost three wickets, with two being LBW decisions.
Captain Dhoni played a lone hand for CSK with a 33-ball 36 not out with the help of four boundaries and two sixes. None of his colleagues gave him company in a pathetic batting display.
Dwayne Bravo (12), who shared 39 runs with Dhoni for the seventh wicket, the best partnership in the CSK innings, was the second best batter. But for the 15 extras Mumbai bowlers conceded, the CSK total would have been much lower.
In the end, Dhoni ran out of partners.
Conway, who played a match-winning knock of 87 in CSK’s match against Delhi Capitals, was struck on the pad off the second ball of the innings bowled by Sams. The umpire raised his finger though the ball hit him just below the knee-roll and looked to be going down the leg. There was no DRS, and Conway had to go for nought.
Two balls later, Moeen Ali (0) edged another Sams’ delivery for Hrithik Shooken to take a catch at short midwicket, as CSK were down two wickets for five runs in the opening over.
It was the turn of Bumrah to join the party as he dismissed Robin Uthappa (1) who could not ask for DRS review of the LBW decision.
CSK got a bit of relief after the 10-ball mayhem but Sams was not done yet as he removed opener Ruturaj Gaikwad (7) who edged behind the wicket to Ishan Kishan in the first ball of the fifth over. CSK were 32 for 5 after powerplay.
After Shivam Dubey was out in the seventh over, Dhoni and Dwayne Bravo slowed down the procession to the dressing room, as they took CSK to 72 for 6 at the end of the 12th over.
But CSK were back to square one as Bravo, Simarjeet Singh and Maheesh Theekshana fell in the space of eight balls to be reduced to 87 for 9 at the end of 15 overs.