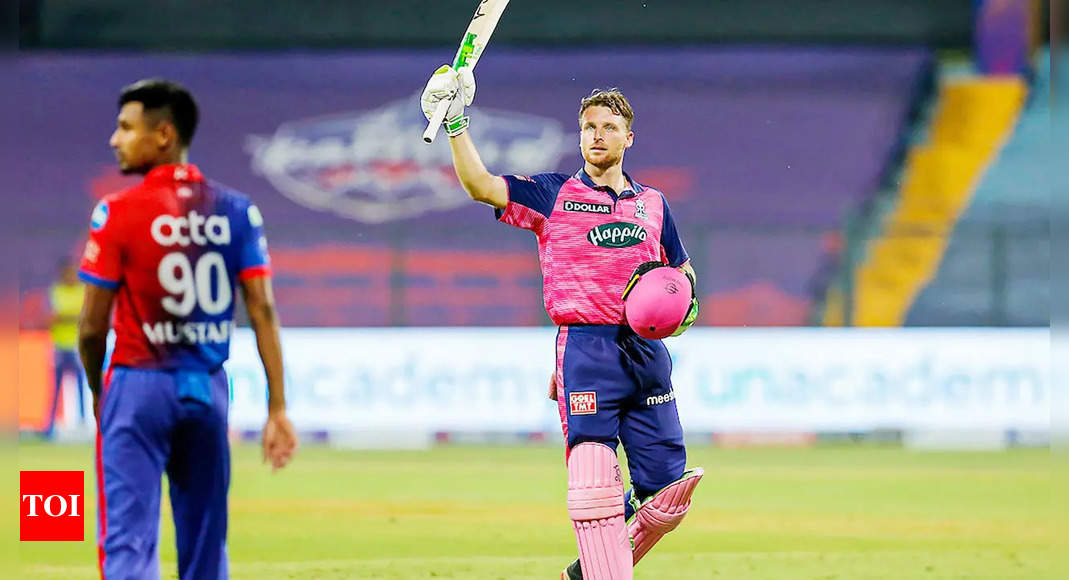 Rajasthan Royals’ Jos Buttler has chosen this IPL to scream to the world that he is on top of the pile of best T20 batters in the world.
With a straight face and murder in his eyes, Buttler is on the loose, wielding his bat like a sledgehammer to open up bowling attacks across venues in Mumbai. His latest victim was the Delhi Capitals bowling attack as he brought up his third century of the season to help Rajasthan post a daunting 222/2 at the Wankhede stadium on Friday night.
Buttler’s knock of 116 off 65 balls must have left a few dizzy heads in the Capitals dugout. It was enough to put the game beyond Capitals’ reach, never mind the dash towards the target through cameos from David Warner (28 off 14), Rishabh Pant (44 off 24), Lalit Yadav (37 off 24) and Rovman Powell (36 off 15).

Ugly scenes mar end of game
Needing 36 off the last over, Powell hit three sixes off the first three balls before skipper Rishabh Pant cotroversially halted the game after the third six, asking for a referral to check a no-ball for height. The game was halted for a few minutes and after a lot of confusion, the game resumed. The momentum, however, had swung, and Capitals fell short by 15 runs.
The two Royals spinners Yuzvendra Chahal (1/28) and R Ashwin (2/32), along with the sharp pace of Prasidh Krishna (3/22), who bowled a wicket maiden in the 19th over, proved to be the difference.
That’s that from Match 34. @rajasthanroyals take this home by a 15-run win. Scorecard – https://t.co/IOIoa87Os8… https://t.co/4zRmYnwFaW— IndianPremierLeague (@IPL) 1650651165000
Buttler’s brilliance
For most part of the powerplay, it seemed Capitals had Buttler under check. With a few streaky boundaries and striking at under 100 till the fifth over, Buttler decided to cut loose in the sixth, dispatching Khaleel Ahmed for a couple of sixes over the deep mid-wicket fence. What followed was 15 overs of marauding batting.
In a league of his own. 🔥😎#RoyalsFamily | #HallaBol | #DCvRR https://t.co/3QdKsteDX0— Rajasthan Royals (@rajasthanroyals) 1650654664000
Buttler’s force was so overwhelming throughout their 91-ball 155-run opening partnership that Devdutt Padikkal’s breezy, faultless 35-ball 54 literally went unnoticed.
.@prasidh43 and @devdpd07 are all smiles for the #IPLSelfie after @rajasthanroyals’s win over #DelhiCapitals.… https://t.co/iuMJuCFT3Z— IndianPremierLeague (@IPL) 1650655479000
Buttler is now close to becoming a manual in T20 batting. He is in absolute control, as he showed during his innings, which had nine fours and nine sixes. He sweeps and scoops fast bowlers, reverse-sweeps and runs down to spinners as if he knows where the ball is about to land.
The Halla continues… 💗#DCvRR | #IPL2022 | #RoyalsFamily https://t.co/8QB7Ktn7tC— Rajasthan Royals (@rajasthanroyals) 1650652314000
The hard and true-paced Wankhede pitch did help but the way he went about chipping sixes at the back end of the innings defied the energy-sapping, sultry conditions on Wednesday night.
Captain Rishabh Pant looked helpless and his bowlers clueless as the innings wore on. Even as Buttler took time to really tee off, Padikkal was eliminating the threat of Axar Patel from the other end.
Buttler bags another Player of the Match award for his excellent knock of 116 as @rajasthanroyals win by 15 runs.… https://t.co/Xx87FpCEoR— IndianPremierLeague (@IPL) 1650652344000
Every forceful shot in the second half of the innings looked like it was destined to hit the boundary ropes. Capitals’ death bowling was again under pressure, conceding 67 off the last five overs. As Sanju Samson (46* off 19 balls) got going against Khaleel Ahmed in the 18th over and by hitting Shardul for a six off the last ball of the innings, Royals put up the highest score of this year’s IPL.