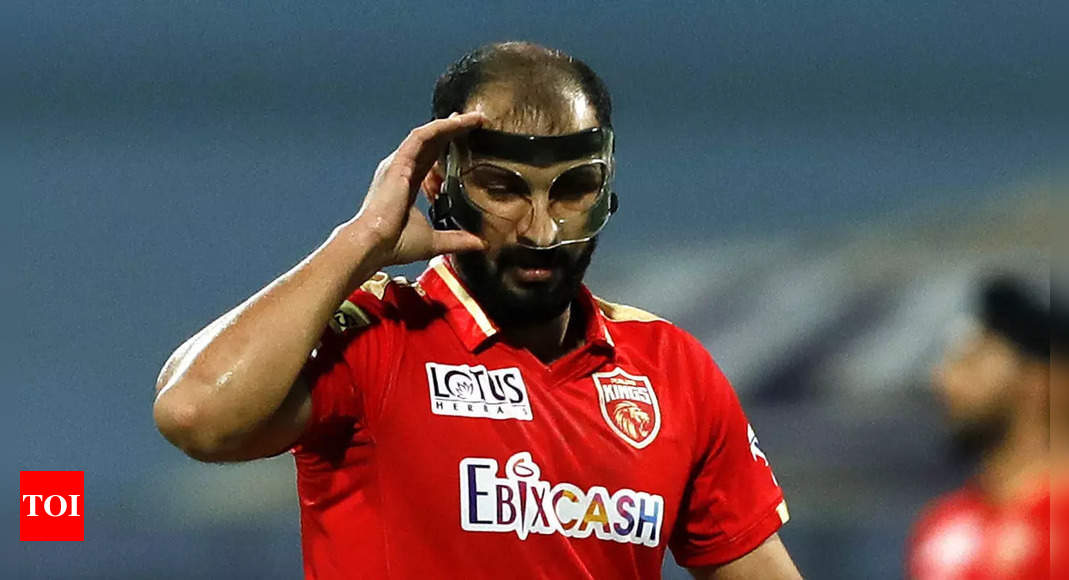 MUMBAI: Punjab Kings’ all-rounder Rishi Dhawan, who was playing his first Indian Premier League (IPL) match after a long gap of almost six years, grabbed everyone’s attention by sporting a face-shield while bowling against Chennai Super Kings on Monday.
The 32-year-old Dhawan was picked by Punjab Kings in the IPL 2022 mega auction for Rs 55 Lakh after his impressive performance in the domestic circuit with Himachal Pradesh. He led his team to the historic Vijay Hazare Trophy last year.
On his IPL comeback, the seamer had a decent outing with the ball for Punjab. He first cleaned up the in-form batter Shivam Dube (8) in his second over and then dismissed MS Dhoni in the last over of the innings, helping Punjab beat CSK by 11 runs on Monday.

Despite Rishi finishing his bowling spell well with figures of 4-0-39-2, the conversation on social media mainly revolved around his shield. Many people even claimed that this was the first instance when they saw a bowler wearing such an accessory.
The seamer sported the equipment for additional protection as he is returning to action after sustaining a serious injury during the Ranji Trophy. According to reports, he was struck on his face in his follow-through during the domestic tournament and even underwent surgery.
Few days back, Punjab Kings had shared a video on social media in which Dhawan can be seen practising with the gear. The experienced campaigner also opened about getting the chance to participate in the IPL 2022 after that disheartening injury.
Rishi Dhawan had an injury during Ranji Trophy and making a great comeback in his first match in #IPL2022 https://t.co/Wh4s7744R2— Johns. (@CricCrazyJohns) 1650905577000
“I am making an IPL comeback after 4 years so it was a little disheartening when I got injured in the Ranji Trophy. I had to go through surgery ,which ruled me out of the first four matches, but I’m totally fine and available for selection now. I’ve been training hard and hope to have a strong comeback,” Rishi had said in the video.
His previous appearance in the IPL was back in 2016 with the same franchise Punjab Kings. He was part of the Punjab squad, which had reached the finals in the 2014 edition.
Rayudu batting even more aggressively tonight. Rishi Dhawan’s glasses may have reminded him of something 😜… https://t.co/GnkZd1vKxs— Wasim Jaffer (@WasimJaffer14) 1650906108000
“It was absolutely a low phase for me because I’d worked so hard to make a comeback and I finally got a chance in the IPL after 4 years. I performed well in domestic cricket. I tried continuously for 3-4 years to make a comeback, so I was a little scared wondering whether I’d miss out on playing due to my injury,” the seamer said.
“But this happens in cricket. Sometimes we’re happy and other times we’re sad. My experience has helped me realize that there will be ups and downs,” he added.