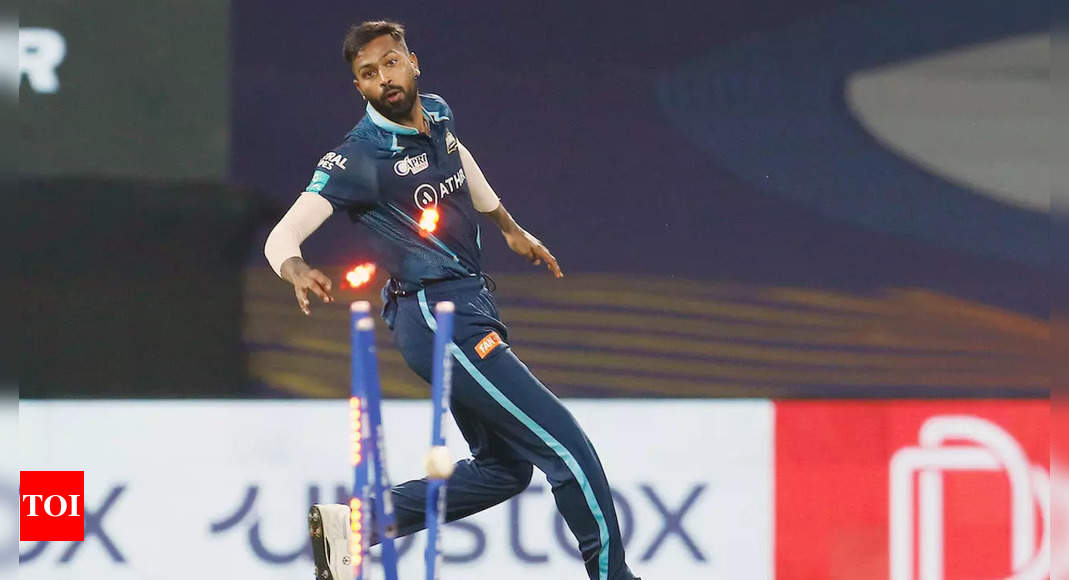 MUMBAI: Gujarat Titans skipper Hardik Pandya said there is a lot of self-belief in his players and they always talk about winning the “right situations”, which was evident in their victory over Sunrisers Hyderabad in a thrilling IPL match on Wednesday.
Needing 56 in the last four overs and 22 off the final six balls, the Titans rode on Rahul Tewatia (40 not out off 21 balls) and Rashid Khan’s (31 not out off 11) incredible power-hitting to end on the winnings side.
This was after SRH pace sensation Umran Malik (5/25) had the Titans tottering at 140 for five in the 16th over in a stiff chase of 196.
Super. Sensational. 𝙎𝙖𝙝𝙖 🏆#SeasonOfFirsts #AavaDe #GTvSRH https://t.co/39lvK7cnpj— Gujarat Titans (@gujarat_titans) 1651087555000
Asked at the presentation ceremony about Rahul and Rashid’s onslaught, Pandya said, “We are quite practical as well and talk about winning the right situations. We always back them because they have a lot of self belief.
“We have intentionally tried to make sure that the dugout or in the dressing room to keep the atmosphere calm because it helps the players play their best game. A lot of credit goes to the support staff.”
Not. Done. Yet. 💪@gujarat_titans Congratulations Team! #TATAIPL #GujaratTitans #IPL2022 https://t.co/D5patXFz9P— Wriddhiman Saha (@Wriddhipops) 1651085584000
In a lighter vein, the GT skipper said that he keeps telling his players that “God is helping” them out.
“I keep joking in the dressing room that God is telling us ‘You guys are good, I’ll help you’. It’s happening so often that I fear we may run out of luck in the knockout games.”
Just keep believing 💪🏾 @gujarat_titans https://t.co/v00io3ARCA— Rahul Tewatia (@rahultewatia02) 1651083688000
Pandya thanked the team’s support staff for the performance in its maiden season in IPL.
“A lot of credit goes to support staff, the kind of environment we have kept. A lot of people get a lot of freedom. It’s very chilled out. There’s not much pressure given to the players. A lot of pressure is taken on by the leadership group.
“Everyone is stepping up and doing justice to what they represent.”
🎼 Can we have this with Titanic theme playing in background please? 💙https://t.co/BNI9fg61co— Gujarat Titans (@gujarat_titans) 1651083309000
Asked about his bowling fitness, he said, “It’s just a conscious decision to manage my bowling, plan is to bowl whenever the team needs me. It’s a long tournament and I don’t want to get too excited early.
“Same with Rahul (Tewatia) as well. He’s ready whenever the ball is given to him.”
Hope nobody’s 🤙🏼 the 🚔 on us coz THAT HEIST WAS UNREAL!#GTvSRH https://t.co/lOzPDolGCe— Gujarat Titans (@gujarat_titans) 1651083214000
SRH captain Kane Williamson felt the game could have gone either way.
“From our perspective, when you have two really strong sides that are playing good cricket going at it, the game is played at very small margins.
“As we saw going into that last over, it could’ve gone either way. So great learning for us as a side, first time batting first for us as well, so a lot of good learning. Another strong performance against top of the table opposition,” Williamson said.