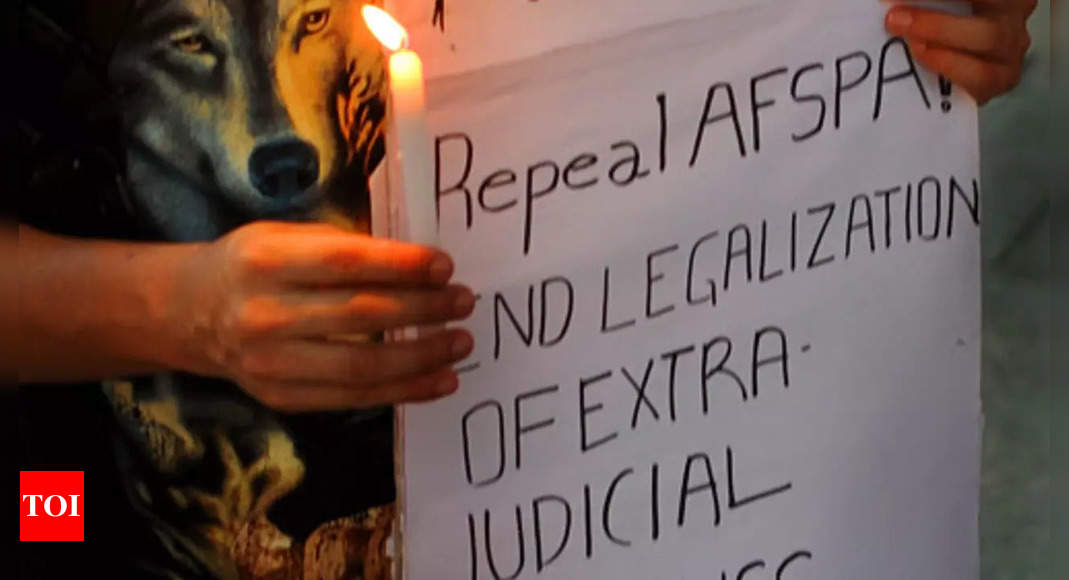 Insurgency-hit Manipur faced the horrors of extrajudicial killings from 1979 to 2012. The apex court, which has been hearing a case for several years now, on Thursday asked the Manipur High Court to decide within six months the issue of grant of sanction to prosecute the security personnel accused of “fake encounters”.
A PIL was filed in the Supreme Court in 2012 by ‘Extra Judicial Execution Victim Families Association and NGO Human Rights Alert, seeking a probe into 1,528 cases of fake encounters that allegedly took place under the shadow of Armed Forces (Special Powers) Act, 1958 of AFSPA. One of India’s internal security laws, AFSPA guarantees a large degree of impunity to security forces engaged in anti-insurgency operations.

The top court had on July 14, 2017 constituted an special investigation team (SIT) comprising officers from the Central Bureau of Investigation (CBI) and ordered registration of FIRs to probe such incidents.
The SIT registered 39 cases, of which 30 final reports were submitted to various lower courts in the state. The Manipur government had reportedly given prosecution sanction in cases in which state police personnel were allegedly involved.
However, the Union Home Ministry denied the prosecution sanction against central security forces citing Section 6 of AFSPA which states, “No prosecution, suit or other legal proceeding shall be instituted, except with the previous sanction of the Central Government, against any person in respect of anything done or purported to be done in exercise of the powers conferred by this Act.”
According to Babloo Loitongbam, executive director of Imphal-based Human Rights Alert, there are 14 cases where no prosecution sanction has been granted. The Chief Judicial Magistrate’s Court in Imphal West referred the matter related to one case to the high court in February 2021.
“This is long overdue; the matter has been gathering dust in the High Court for (almost) two years without any progress. It is good that the Supreme Court has now set a time frame of six months to complete it,” Loitongbam told this writer.
On Thursday, Additional Solicitor General Aishwarya Bhati told the top court that status reports have been filed from time to time in the matter, and out of the 39 cases probed by the SIT, charge sheets have been submitted in 19 and closure reports in 18.

A bench comprising Chief Justice Uday Umesh Lalit and Justice Bela M Trivedi, meanwhile, permitted the CBI to grant some additional work to the investigators of the apex court-appointed SIT after Additional Solicitor General Aishwarya Bhati said the probe entrusted to them in the alleged extra-judicial killings was over.
“In 39 cases, which were investigated by the agency pursuant to the apex court’s order, the oldest case was of 1984. Your lordships had said that every single allegation need not be enquired into,” Bhati was quoted as saying by PTI. The law officer also submitted that SIT officials may now be permitted to do some additional work as the probe was over.
Senior lawyer Colin Gonsalves, appearing for the petitioner, however, contested the submission that the probe in all cases was over. Out of 655 cases, which were to be probed by the SIT, only 39 cases have been investigated and Inquiries in the rest have been abandoned, he alleged.
(With inputs from agencies)