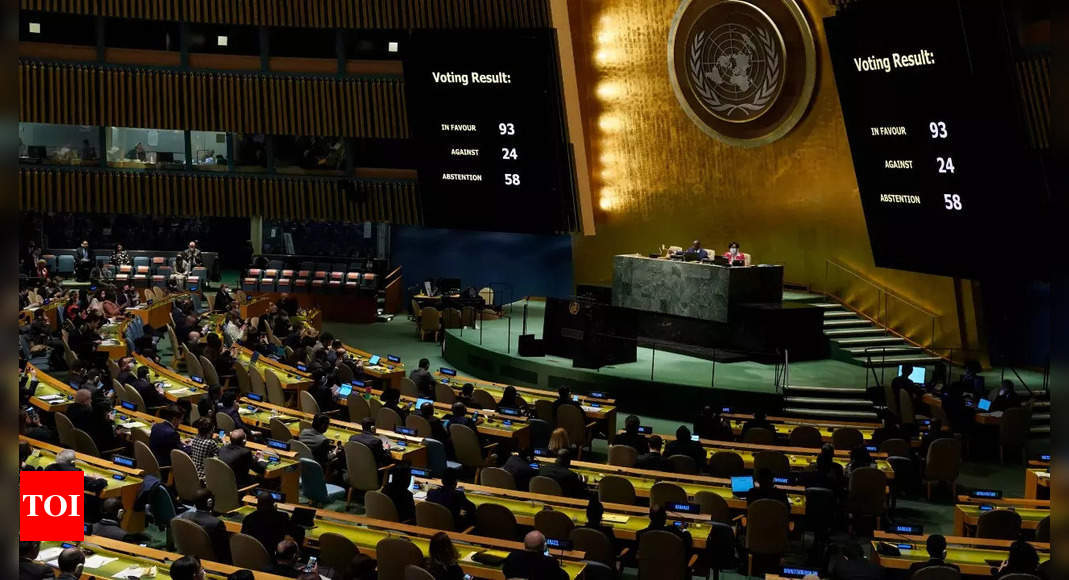 NEW DELHI: The UN General Assembly adopted by consensus a resolution seeking justification for the use of veto power by any P-5 country. The resolution was seen as an attempt to discourage Russia’s use of its veto power, which Moscow has exercised more than any other permanent member of the UN Security Council (more than 20 times since 2010) in the recent past. Russia is learnt to have said it would have no problem explaining use of veto if the resolution was adopted by consensus.
The provocation for the resolution, which was introduced without proper consultations with all member-states, was Russia vetoing a resolution in the Council that deplored its actions in Ukraine. India, along with other countries, would have abstained if the resolution had been put to vote. Despite the consensus, many countries, including India and China, expressed concern over the manner in which the resolution was introduced. India said it had several concerns about the initiative.
India said that the resolution was against the unanimous agreement that all aspects of UNSC reforms, and not just the veto issue in isolation, would be addressed and decided in a comprehensive manner.
“We regret the lack of inclusivity in the manner this resolution was put forth. We have serious concerns about such ‘take it or leave it’ initiatives which do not make a genuine effort to take into account the perspectives and concerns of the wider membership,” said ambassador R Ravindra, the deputy permanent representative of India to the UN.
While the resolution will see any use of veto power automatically leading to a meeting in the UNGA for an explanation, India said there are already mechanisms in place, which enable the membership of the Assembly to decide on an “emergency basis” to convene discussions or even take action on issues that reach stalemate in the Security Council. “We need not add an ‘automatic’ invocation of another mechanism by rewriting the existing rules,” said the Indian representative.
The government said it was ironical that the same set of member-states which argue vociferously against ‘piecemeal reform’ were themselves supporting a piecemeal initiative. The official said all P-5 countries have used veto power and the UNGA can do very little about it as effectively the P-5 have a veto over the veto.