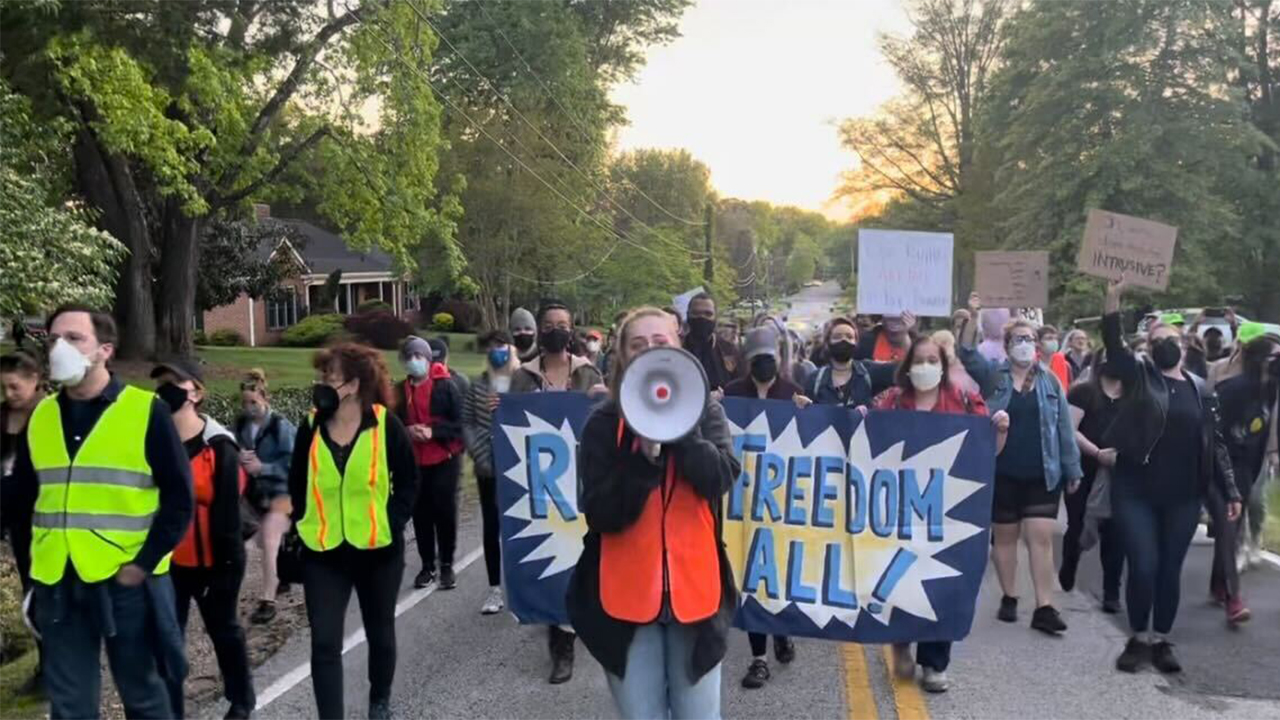 The host of “The Dan Bongino Show” further offered to share his videotaped evidence “of a federal crime” with the FBI, remarking that his program is aired on WMAL and therefore very likely inside the J. Edgar Hoover Building.

Citing Section 18.2 SS 419 of the Code of Virginia, Bongino read, “Any person who shall engage in picketing before or about the residence or dwelling place of any individual — or who shall assemble with another person or persons in a manner which disrupts or threatens to disrupt any individual’s right to tranquility in his home — shall be guilty of a Class-3 misdemeanor.”

Bongino reported that Virginia Republican Gov. Glenn Youngkin has said he is “monitoring” the situation at the homes of justices who reside in his state, but urged the newly-elected leader to do more.

He said he embraced Youngkin’s 2021 victory over Democrat Terry McAuliffe, and believes he is doing an overall good job in office, but reiterated his concern the administration in Richmond isn’t taking fervent enough action against likely lawbreakers.

“You’ve been doing a decent job, but this is in Virginia — in your state,” he said, adding it is fair to comment on elected officials even if he largely supports them.

“I’m again not in this for the politics. I’m not looking to kiss anybody’s a– – he seems like a decent guy, I’m glad he won, but you have to take some cues from Ron DeSantis, who enforces the law down here in Florida,” Bongino said.

In a weekend statement, Virginia Republican Attorney General Jason Miyares condemned threats of protest against Catholic churches in the Old Dominion, writing in a statement that he plans to “refer alleged criminal violations to the [US DOJ]” or the Commonwealth’s attorney for the municipality in question.

“I will not hesitate to bring suit to protect the religious freedom of the citizens of this Commonwealth,” said Miyares.

Youngkin said Monday he is coordinating with Fairfax County Police – who cover Alito’s neighborhood – and the Virginia State Police to “ensure that there isn’t violence.”

A spokesman for the governor later told another outlet that “substantial resources” are being dedicated to the situation, and that Youngkin’s “priority is the safety of all Virginians.”

On the other side of Washington, similar demonstrations continued at the Chevy Chase, Md., homes of Justices John Roberts Jr and Brett Kavanaugh.

In response to the unrest, fellow conservative Justice Clarence Thomas rebuked the protests, saying in Atlanta that the Supreme Court “can’t be an institution that can be bullied into giving you just the outcomes you want.”