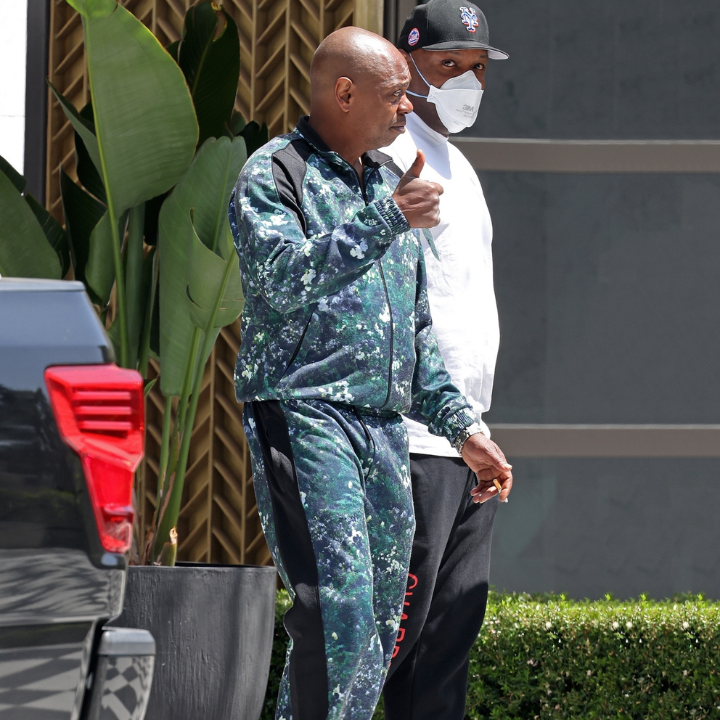 Comedian Dave Chappelle was seen for the first time after he was attacked while performing on stage at the Hollywood Bowl in Los Angeles on Tuesday night.

Chappelle was attacked during a show at the Hollywood Bowl when a man jumped onto the stage and attempted to tackle the comedian, videos of the incident appear to show.

The person who attacked Chappelle was quickly taken off the stage by security, and was taken out of the venue in an ambulance.

The alleged attacker, Isaiah Lee, 23, was arrested shortly after the incident and charged with assault with a deadly weapon, according to police.

Chappelle was seen for the first time after the attack on Wednesday while arriving at a Los Angeles restaurant for breakfast. He is seen with rapper Mos Def.

The comedian can be seen giving a thumbs-up to photographers before entering the restaurant.

Lee was carrying a replica gun with a knife blade inside when he allegedly attacked Chappelle. He lives in the Los Angeles area and is being held on $30,000 bail.

No court date has been set, according to public records.

DAVE CHAPPELLE ATTACKED AT HOLLYWOOD BOWL: WHO IS THE ALLEGED SUSPECT, ISAIAH LEE?

The comedian was performing at The Hollywood Bowl as part of his “Netflix is a Joke” when the attack happened. He was attacked as the show was ending, and thanked actor Jamie Foxx and rapper Busta Rhymes for coming to his defense during the incident.

“Whenever you’re in trouble Jamie Foxx will show up in a sheriff’s hat,” Chappelle said.

Chris Rock was also in attendance at the show, and made a joke on stage after the attack, saying “Was that Will Smith?”

A representative for the comedian previously told Fox News Digital that Chappelle refuses to let the attack “overshadow the magic of this historic moment.

“Dave Chappelle celebrated four nights of comedy and music, setting record-breaking sales for a comedian at the Hollywood Bowl,” his representative said. “This run ties Chappelle with Monty Python for the most headlined shows by any comedian at the Hollywood Bowl, reaching 70k fans of diverse backgrounds during the first ‘Netflix Is A Joke: The Festival,’ and he refuses to allow last night’s incident to overshadow the magic of this historic moment.”