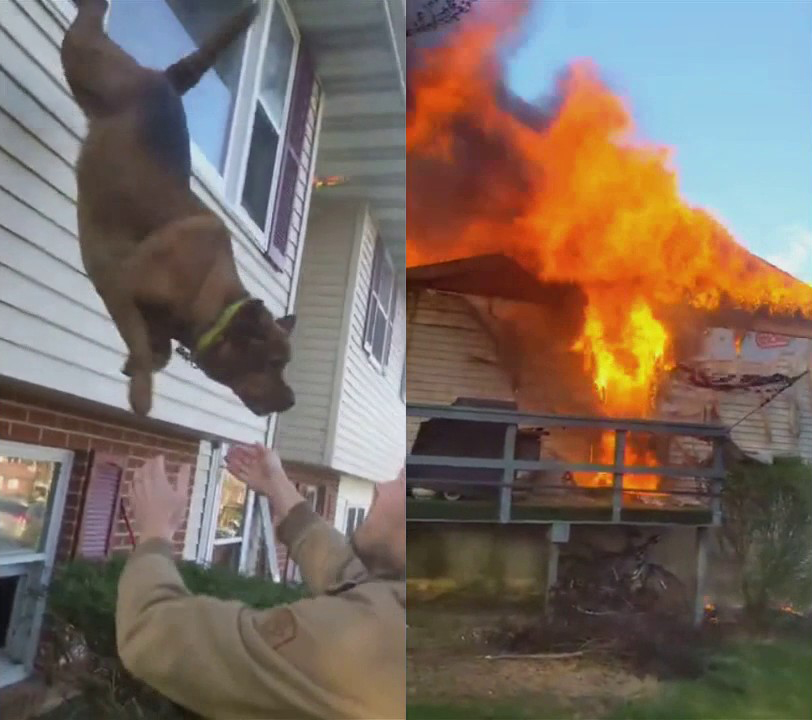 A dog jumped to safety from an upstairs window amid a blazing house fire in Berks County, Pennsylvania, Wednesday.

In a video taken by eyewitness Justin Steinmetz, a dog can be heard crying as people called up and told it to jump through a window that had been left open.

The dog is then seen leaping to the ground.

GERMAN SHEPHERD RESCUED AFTER FALLING DOWN 12-FOOT HOLE IN CALIFORNIA

Steinmetz told a local Fox News outlet that he first saw the fire when driving to work around 8 a.m. Wednesday.

He then pounded on the neighbor’s door, telling them to call 911 before trying to put out the blaze with the watering hose, quickly realizing it wasn’t going to work.

“I hope the dog’s out,” he reportedly said.

One dog was then rescued out the front door. But another dog can be heard crying and was seen trying to escape through an upstairs window.

A dog in Berks County, Pennsylvania, escaped a burning home by jumping out a window.
(Steinmetz Family Farms)

With encouragement from the neighbors the dog eventually made the fearful leap to safety with visible scorch marks on its back.

The dog is recovering at a local animal hospital.

Two cats were also in the home at the time of the fire with one later found and rescued from a lower level of the house.

One cat is still believed to be missing.

It is unclear where the family was during the fire or what caused the blaze.

A GoFundMe page has been set up for the family.

“Our hearts are broken for the Stump family,” the page says. “We are very grateful they are ok, but are painfully aware that their lives will be significantly impacted as a result of the devastating fire to their home today.”

Over $39,500 has so far been raised for the Pennsylvania family.