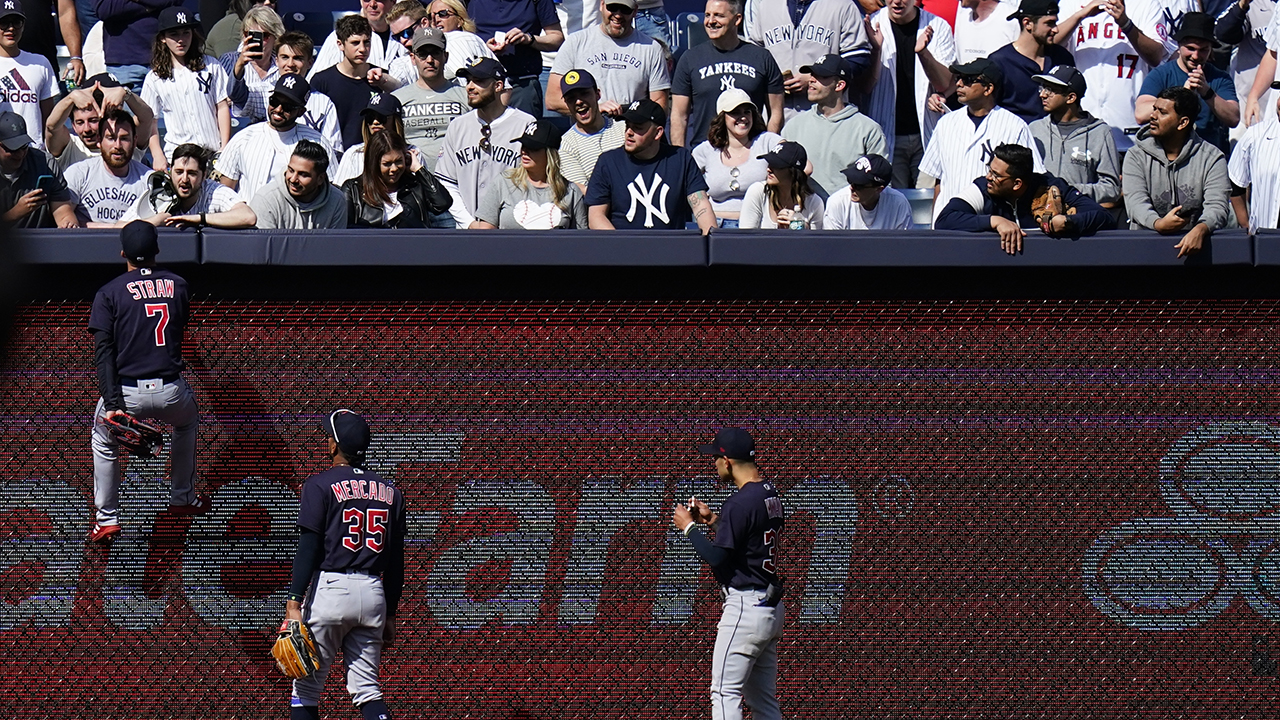 Cleveland Guardians outfielder Myles Straw was the subject of taunts at Yankee Stadium Sunday, just one day after he suggested the Yankees have the “worst fan base on the planet.”

Straw made the comments after fans at the stadium pelted Cleveland outfielders with high-priced concessions Saturday in a chaotic scene moments after New York rallied for a 6-5 win. The chaos in the ninth inning occurred after fans taunted an injured Guardians player and Straw was seen scaling the left field wall to confront a fan.

Cleveland Guardians’ Myles Straw (7) climbs the left field wall to talk with a fan during the ninth inning of a baseball game against the New York Yankees Saturday, April 23, 2022, in New York. The Yankees won 5-4.
(AP Photo/Frank Franklin II)

Following the confrontation as well as his fan base comments, a section of Yankees fans, known as Bleacher Creatures, were heard greeting Straw Sunday with chants of “Crybaby!”

Straw received boos as starting lineups were announced and fans also taunted him by yelling “Peter Parker!” a likely reference to him climbing up the wall in Spiderman-like fashion.

Meanwhile, Yankees star Aaron Judge clapped toward the bleachers Sunday as he took a position in right field. He was one of the Yankees stars to urge fans to stop throwing trash during Saturday’s incident.

The chaos on Saturday started with one out in the ninth inning when Isiah Kiner-Falefa scored a game-tying double that went over the head of Guardians outfielder Steven Kwan, who crashed into the left field fence. Yankees fans then started hurling insults at the injured player, which prompted the close-up confrontation between Straw and the fan.

Members of the Cleveland Guardians react after fans throw debris on the field following Gleyber Torres #25 of the New York Yankees walk off RBI single in the bottom of the ninth inning during the game between the Cleveland Guardians and the New York Yankees at Yankee Stadium on Saturday, April 23, 2022 in New York, New York.
(Photo by Rob Tringali/MLB Photos via Getty Images)

“I was just hot at that point,” Straw said, via The Athletic. “Just basically telling them, ‘Be quiet. Shut up. There’s no business, what you’re saying to this guy right now.’”

After the initial incident, play resumed and Yankees pinch hitter Gleyber Torres lined a single to right-center for the game-winner.

As Guardians outfielder Oscar Mercado and Straw chased the ball in the gap, several fans began throwing objects at them, which Straw described as a “beer parade.”

“You could see [the debris] coming from a mile away,” Straw said, via the outlet. “So just trying to avoid the beer cans. And our bullpen was getting hit with them, too. It doesn’t surprise me.”

After the game, he said the Yankees fans were “classless,” and called them the “worst fan base on the planet,” leading to the additional tensions.

On Sunday, security was ramped up for the game between the two MLB teams, with a guard located at the bottom of each aisle in right field.

As of 3:30 p.m., no beers or concessions had yet to be thrown. The Yankees are leading 8-0 going into the 7th inning.

The Associated Press contributed to this report