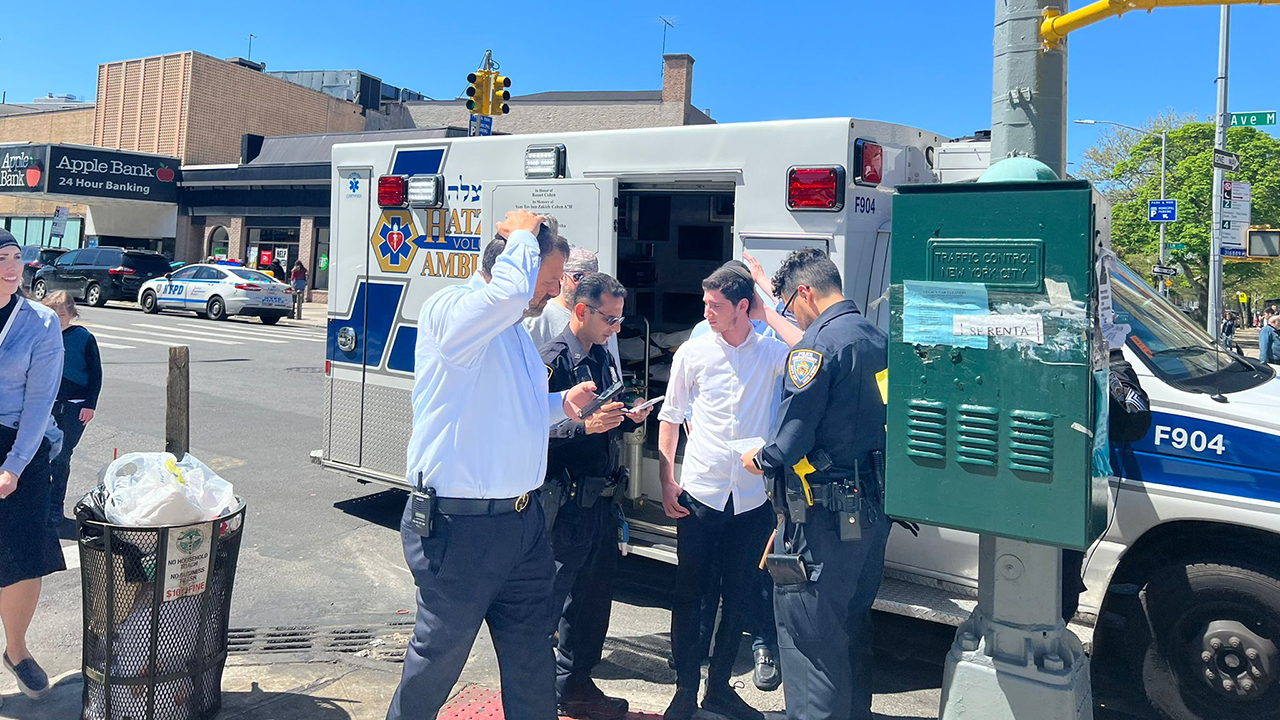 A Jewish man was hit in the face while walking down a street in Brooklyn, New York Tuesday afternoon because he wouldn’t say “Free Palestine,” according to a report.

The man, 18, and a friend were on Avenue M just after 2 p.m. ET when they realized they were being followed by a group of teenagers, according to Hamodia, a Brooklyn-based Jewish newspaper.

A Jewish man was allegedly hit in the face while walking down a street in Brooklyn, New York Tuesday afternoon because he wouldn’t say “Free Palestine.”
(Aaron Baruch Berger/Hamodia.com)

One of the teens approached them and demanded they say “Free Palestine.” When the men attempted to ignore them, the teen allegedly punched one of the men, leaving him with a bloody eye.

“We didn’t acknowledge him,” the friend told the newspaper of the teen’s demands before the attack.

The alleged assailant and the other teens reportedly ran away, and the victim was taken to the hospital.
(Aaron Baruch Berger/Hamodia.com)

The alleged assailant and the other teens reportedly ran away, and the victim was taken to the hospital.

No arrests have been reported.

A still from surveillance video shows one of the alleged suspects running down a street.
(Flatbush Shomrim)

Last Friday, a Brooklyn rabbi was attacked by a man who shouted antisemitic remarks at him, according to WABC-TV in New York City. The rabbi was taken to the hospital and no arrests have been reported.

A year ago, a group of teens who allegedly attacked Jewish teens in the same neighborhood, demanding they say “Free Palestine” and shouting “Kill all the Jews” were charged with a hate crime, according to Hamodia.

Antisemitic incidents in the U.S. have escalated over the last few years and last year was the highest number of attacks on record with 2,717 incidents, according to the Anti-Defamation League (ADL).

Violent assaults increased by 167% last year, 88 up from 33, with a surge occurring during the Israel-Hamas conflict in May 2021.

“While we have always seen a rise in antisemitic activity during periods of increased hostilities between Israel and terrorist groups, the violence we witnessed in America during the conflict last May was shocking,” ADL CEO and National Director Jonathan Greenblatt said in a statement. “Jews were being attacked in the streets for no other reason than the fact that they were Jewish, and it seemed as if the working assumption was that if you were Jewish, you were blameworthy for what was happening half a world away.”

Another surge occurred in November and December last year.

Greenblatt added, “When it comes to antisemitic activity in America, you cannot point to any single ideology or belief system, and in many cases, we simply don’t know the motivation. But we do know that Jews are experiencing more antisemitic incidents than we have in this country in at least 40 years, and that’s a deeply troubling indicator of larger societal fissures.”