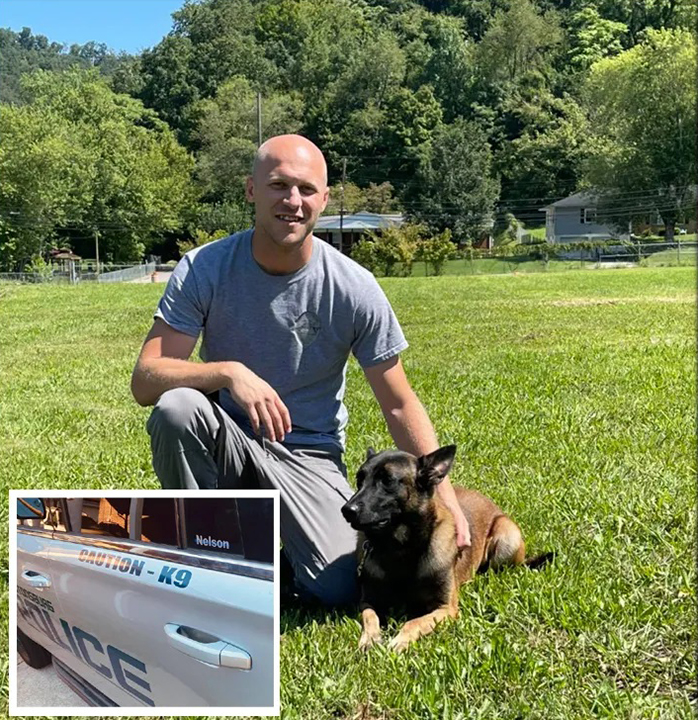 Three Kentucky police officers and a police canine were killed and at least four other officers were injured following a shootout in a residential area in the city of Prestonsburg Thursday night, police said.

Lance Storz, 49, was taken into custody following a shootout at his home, as two officers arrived to serve him an arrest warrant shortly before 7 p.m. Storz, armed with a rifle, opened fire and struck both officers, the Prestonsburg Police Department said.

Floyd County Sheriff John Hunt told reporters Friday that the officers encountered “pure hell” when they arrived on the scene, saying they had “no chance.”

Other officers from different jurisdictions responded to the incident and at least four were injured, they added.

Ptl. Jake Chaffins &amp; K9 Nelson were killed during a shootout on June 30, 2022.
(City of Prestonsburg)

“It’s heartbreaking, you know, anytime you have a loss of life,” Trooper Matt Gayheart of Kentucky State Police told Fox 56. “Not only did I work with these people, these were our friends, and as a community, we have to stick together and push through it together. And we do ask everybody to keep those officers in your thoughts and prayers.”

Nelson was a Belgian Malinois, born Jan. 20, 2020. “Nelson began training for a career as a service dog at birth and was imported to the United States this past July where he began specific fields of training and screening,” the city added.

Captain Ralph Frasure, left wearing khaki pants, of the Floyd County Sheriff’s Office was photographed during his swearing in ceremony on June 21, 2022. He was fatally shot on June 30, 2022.
(City of Prestonsburg, Kentucky Police Department)

“The man fired hundreds of rounds from prepositioned firearms throughout the home,” a post from the Officer Down Memorial Page read.

Lance Storz was charged with murder of a police officer and assault on a service animal.
(Credit: Pike County Detention Center)

“For thirty-nine years you served with honor and glory up until the last second when you did not go down without a fight. We love you. Your work here is done. There will never be another,” said Prestonsburg Police in an end-of-watch Facebook post honoring Frasure.

“You have dedicated your short time on this earth to the service of the citizens of Prestonsburg and the Commonwealth as an EMT, Fire Fighter, and Police Officer. You further dedicated yourself to the security of our country as a valiant soldier,” another end-of-watch post, honoring Chaffins, said.

“The lives you’ve saved since you even started policing are innumerable, and that’s how you gave your life – saving another. We will shine your light to Paisley and the world so long as we breathe,” the post added. “Rest yourself, we have the watch.”

Gov. Andy Beshear confirmed the “tragic loss” of the officers in a tweet Friday morning and asked members of the Floyd County community to be praying for the injured and the families of those affected by the shooting.

“Floyd County and our brave first responders suffered a tragic loss last night,” the governor tweeted. “I want to ask all of Kentucky to join me in praying for this community. This is a tough morning for our commonwealth.”

TENNESSEE MAN ON THE RUN AFTER ALLEGEDLY SHOOTING POLICE OFFICER, DEAD AFTER SHOOTOUT WITH KENTUCKY POLICE

“Britainy and I are praying for the families of those lost, those injured and the entire Allen community. These heroes sacrificed everything to protect our people,” Beshear added in a subsequent tweet.

She also said her “thoughts and prayers are with” each of the families affected by the shooting. “Let us honor our first responders for their bravery and sacrifice,” she added.

The conditions of the injured were not immediately clear.

Three Prestonsburg police officers were killed and others were injured during a shooting incident on June 30, 2022.
(Prestonsburg Police/Facebook)

He is being held on a $10 million bond ahead of his July 11 court hearing.