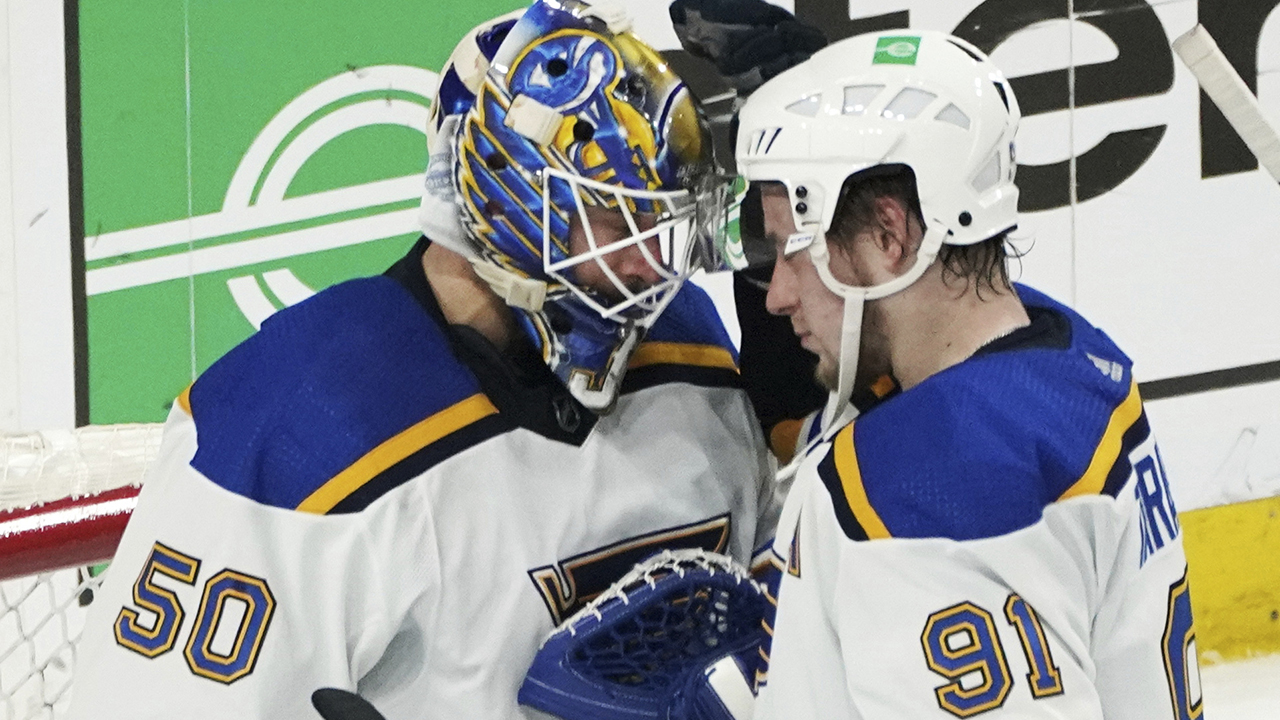 Vladimir Tarasenko broke out for the St. Louis Blues with a well-timed natural hat trick, putting the Minnesota Wild in real trouble.

Afterward, Tarasenko tried to shrug off the significance of his feat — with the singular focus of a player who was a major part of the run to the Stanley Cup championship three years ago.

Tarasenko had three goals in the third period to pry open a tied game and series, and the Blues pushed the Wild to the edge of elimination with a 5-2 victory in Game 5 on Tuesday night.

“It’s not the time to think about any achievements. The biggest thing is we won the game, and let’s move onto the next one,” said Tarasenko, who scored once in the first four games. “At this point, from experience in 2019, we learned that only wins matter.”

Ryan O’Reilly scored for the fourth time in the series and Brandon Saad got the tying goal late in the second period as the Blues upstaged a stellar performance by Wild star Kirill Kaprizov. Whatever rivalry exists between the two Russians, Tarasenko wasn’t having any part of that, either.

Kaprizov brought the building to life on yet another late-night start — puck drop was at 8:50 p.m. local time — by scoring twice on Minnesota’s previously sluggish power play in the first period. Kaprizov has an NHL-leading seven goals in the playoffs, already a Wild record for a series.

The Wild are 4 for 19 on the power play, and Kaprizov has three of the goals.

The series returns to St. Louis for Game 6 on Thursday night. If the Blues win, Game 7 would be back in Minnesota on Saturday. The top-seeded Colorado Avalanche, fresh off a sweep of the Nashville Predators, are waiting in the second round.

Entering this year, there have been 277 best-of-seven postseason matchups in NHL history that were tied at two games apiece. The Game 5 winner went on to take the series 219 times, a whopping .791 winning percentage.

“I’m very confident in in our team. It’s not a time to put down our hands. It’s the time to stay confident,” Kaprizov said through a translator, also disinterested in relishing his individual play.

“He got out so many pucks tonight and made real good plays with them,” Blues coach Craig Berube said. “He’s a pretty calm, cool customer.”

Pavel Buchnevich outmuscled Jacob Middleton for the puck behind Marc-Andre Fleury’s net and fed Tarasenko for the go-ahead score with 63 seconds elapsed after the second intermission.

Then Tarasenko, who bounced back strong with 34 goals in 2021-22 after consecutive injury-wrecked seasons, gave the Blues a two-goal lead with his wrist shot from the high slot just 1:28 later. He tacked on an empty-netter with 1:33 remaining.

“I liked our chances after two, being tied,” said Fleury, who stopped 27 shots. “We’ve had so many great third periods throughout the season. They pushed hard to create some chances and buried them. I would have liked to have saved them all, right?”

The Blues have had plenty of strong finishes, too.

“Our third period there was kind of our identity,” Saad said. “We got better as the game went on.”

The Blues bolstered their blue line by bringing Robert Bortuzzo and Nick Leddy back from their upper-body injuries that kept them out of the two games in St. Louis, though defensemen Torey Krug and Marco Scandella were again absent with lower-body injuries.

Rookie Scott Perunovich, who appeared in the lineup in Game 4 for his first action in four months, was the seventh defenseman to suit up while the Blues made only 11 forwards active. The native of Hibbing, Minnesota, made his presence felt on the power play after Middleton was whistled for cross-checking — a dubious call from the view of the booing home crowd — to give the visitors the man advantage just 4:06 into the game.

Perunovich’s slap shot forced Fleury to create a rebound, and after a scramble for the puck that Brayden Schenn won in front of the crease, O’Reilly found it with an open net to knock it in.

Kaprizov had seen enough of the power play imbalance by that point.

Marcus Foligno screened Binnington on Kaprizov’s first goal, a wrister that buzzed over the goaltender’s glove. Then on another man advantage situation less than four minutes later, Kaprizov hustled to take possession the puck from an off-balance Colton Parayko and kept the play alive.

Kevin Fiala passed from the corner to the back edge of the left circle, where Kaprizov snapped a shot into the narrow slice of space above Binnington’s right shoulder and the back corner of the net. That gave the Wild a 2-1 edge, completing the first lead change in the series.

NOTES: Marian Gaborik, with nine goals in 18 games in 2003, holds the Wild scoring record for a single postseason. Zach Parise, with 16 goals in 44 games, has the most career playoff goals in franchise history. Kaprizov, with nine goals in 12 games, is already tied for fourth on the all-time list. … This was Saad’s 20th career postseason game against Minnesota, including 15 with Chicago, but just his fourth goal. … The Blues have at least one power play goal in each game. They’re 6 for 20.